The site of Kilnave Chapel and Cross is one of the most tranquil places on Islay. The site sits just above the shoreline and the views over the eastern part of Islay and over Loch Gruinart are simply amazing. Opposite the site is Killinallan Point and in between nothing but a stunning turquoise sea with nice beaches on both sides. In the winter season you can find thousands of Barnacle Geese in the surrounding fields. The spring and summer sky is filled with the sounds of Oystercatchers and other wading birds.

It’s hard to believe that such a stunningly peaceful place has such a violent and tragic history. During the last Clan battle on Islay in 1598, between the MacDonalds and the MacLeans, 30 MacLeans sought sanctuary in Kilnave Chapel. The MacDonalds, thinking their chief was killed, set fire to the chapel and none of the MacLeans survived. There is a memorial Cairn to be found on the road to Loch Gorm from the RSPB Visitor Centre at Loch Gruinart.

Where is Kilnave Cross and Chapel

Kilnave Cross and Chapel can be found on the western shore of Loch Gruinart on the road to Ardnave from the RSPB visitor centre. But beware, you easily miss it, especially when you drive in a low car due to the wall on your right. The following link to Google Maps will show you the exact position

Origins of the name Kilnave

The name Kilnave Chapel is known in Gaelic as Cill Naoimh. The chapel at Kilnave was built in the late 1300s or early 1400s and belonged to the parish of Kilchoman. Kilnave Cross however was erected here around the 700s and is somewhat similar to Kildalton Cross. The latter however is a ringed cross where Kilnave Cross is believed to be of a different design. This cross is carved on one side only, and very little remains of the design; indeed, it requires a very good light to decipher what is left. Also, the stone for this cross is less durable than the cross at kildalton, which is therefore better preserved.

Kilnave chapel, now in ruins, measures 29 feet by 14 feet with walls that are well over 2 feet thick. The door which is at the west end is round-headed and very low, and its arch is constructed of thin slabs of whinstone. It is furnished with the long bolt-hole so common in the Highland churches, an arrangement by which a strong beam of wood could be pulled completely across the door on the inside while a sufficient length of the beam remained in the hole to keep it in a horizontal position.

The church is lighted by a small round-headed window at the east end, and by a smaller one in the south wall near the altar. There are traces of the foundations of the altar. In the churchyard is one sculptured gravestone and several other graves, slabs and smaller crosses.

I'm not sure if there are places in Europe where wildlife is more abundant and as diverse as on Islay. Wherever you walk or drive, there is always something to be seen, and often something special … END_OF_DOCUMENT_TOKEN_TO_BE_REPLACED 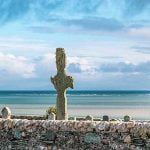 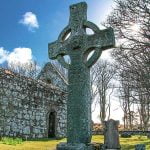