The Islay Ferry is the lifeline service between the Scottish Mainland and the Isle of Islay. It’s a vital shipping link for folk living on the island, for business and distilleries, and for tourists visiting the island. The Islay Ferry is as much a topic of daily conversation as the weather, I guess that says it all! If the ferry doesn’t sail, the papers are late and locals miss their hospital appointments. Businesses suffer as they can’t deliver their goods and the supermarkets aren’t supplied with fresh food etc. Being left without a ferry for several days can be very annoying but it’s part of island life. It doesn’t happen a lot though and if, usually only in the wintertime.

In my opinion there’s nothing more rewarding than travelling by boat to your holiday destination, especially when it’s Islay. The Islay Ferry takes you to completely different place in a matter of hours. Hamish Haswell-Smith wrote in his book The Scottish Islands about the Hebrides: ‘The mere crossing of a short stretch of water can be like visting another continent.’ That’s exactly how it feels. The excitement to board the ferry, the views over the sea and seeing your final destination getting closer by the minute. It’s a thrill to take the ferry to Islay, to arrive in Port Ellen or Port Askaig and set foot on Islay.

Video of the Ferry Crossing from Kennacraig to Port Ellen

In the 1800s private operators ran steamship services to the west Highlands and Islands. One of these island services came under control of G & J Burns which, through a later partnership, ended up eventually with David MacBrayne. The Islay service was added in 1876 and when the railways arrived MacBrayne carried mail from the railway end stations to the island. The mail-steamer was born. These services were back then already important for Islay as legal whisky Distilleries opened up and the production of Islay Whisky was growing. Supplies were needed on the island and whisky had to be shipped off the island to the mainland by boat.

One of the better known mailboats on Islay was the MV Lochiel. She was the regular Islay mailboat operated by David MacBrayne Ltd from 1939 until 1970. There is a garden and small monument for the MV Lochiel in Port Ellen, on Frederick Crescent.

Early 20th century MacBrayne was the main company to carry passengers, mail and cargo from railway end points to the islands and remote parts in the west of Scotland. After world-war one the company was taken over by London Midland Scotland Railway (LMSR) and Coast Lines Ltd. The name MacBrayne was retained. The state gained control of half the share of MacBrayne’s and in 1969 this share was used to the Scottish Transport Group (STG). Later the state owned company Caledonian MacBrayne was born, known by many as Calmac.

Clyde puffers were small bulk cargo vessels capable of landing at small piers or on the beach to discharge coal and other cargo. These puffers [link to youtube video] provided a vital supply link around the west coast and Hebridean islands. The original Clyde Puffers were introduced in the Clyde and Scottish canals from the 1860s onwards. From this basic puffer three varietes evolved and one of them was the outside boat with a length of around 27 metres. These were built for the rougher sea routes to the Hebridean islands and had a crew of four. Clyde Puffers were built until 1939.

Para Handy is the famous captain on board the Vital Spark, a Clyde Puffer. He was invented by Neil Munro who started with his short stories in the Glasgow Evening News in 1905. He achieved widespread fame as he wrote about Para Handy for over twenty years! The adventures of Para Handy were turned into three popular BBC television series and the Clyde Puffers themselves were the stars in the film The Maggie. Parts of this film were shot on Islay.

The cargo vessels and Clyde Puffers were not equipped to deal with road transport. Cars where therefore regarded as cargo and hoisted onboard the ships like bulk cargo. Later on the first purpose built car ferries were introduced, the so called Ro-Ro (roll-on roll-of) ferry, operated by Western Ferries. On these ships you drove forwards onto the car decks and then turn before you could leave the ship. A time consuming operation!

Later ferries were of the ‘drive through’ sort, the ones similar to the current Islay Ferry with ramps at the bow and stern. Caledonian MacBrayne as we now know it was formed in 1990. Due to the fact it was state owned they were becoming a major operator on the west coast of Scotland and on the Islay service. Western Ferries lost the battle and claimed they were forced off the Islay route. They now operate a service on the Clyde.

The state owned company Caledonian MacBrayne Ltd. or Calmac, is still running the Islay Ferry service. But not only that, they run most of the west coast and Clyde services. A few services are run by the council such as the Islay to Jura Ferry. And Calmac is also not present on the routes to Orkney and the Shetland Islands.

Calmac provides a mostly reliable ferry service to Islay from Kennacraig to either Port Ellen or Port Askaig. In the summer season there are two ferries on the Islay route. In the winter season it’s often down to one as the ferries are taken off the service one by one for their annual overhaul.

The mainland has one ferry port for Islay, that’s Kennacraig in Argyll and Bute. It’s a three hour drive [link to google maps] from the centre of Glasgow over the A82 along Loch Lomond and the A83 over Rest and be Thankful.

The MV Finlaggan is the newest ferry on the Islay service. She was built in Poland and arrived on the Islay ferry service in 2012. Ar first the ferry was considered too luxury and posh by some as it was quite a step up from the MV Isle of Arran, the vessel it replaced. But after a few years in service folk appreciate the Finlaggan very much. It has all the luxuries one can wish for, plenty of space to sit and a good restaurant and bar as well. The capacity of the Finlaggan is 85 cars, 10 lorries and max 500 passengers.

The MV Hebridean Isles is one of the oldest ferries in the Calmac network. The ferry was built in 1985 and is now 36 years old. With its age come the problems and it happens quite frequently that this ferry is delayed or cancelled due to technical issues. The capacity compared to the MV Finlaggan is considerably less. The Hebridean Isles can take 62 cars and 494 passengers. And with each lorry on the ferry it can take 3 to 4 cars less. Space can be somewhat limited, especially on busy days. A pleasant thing from this ferry is the fact that there is plenty of outside space compared to the MV Finlaggan.

Booking is easy and can be done either online (recommended) or over the phone. For details and online bookings check the Calmac website www.calmac.co.uk. Make sure to book as soon as possible! 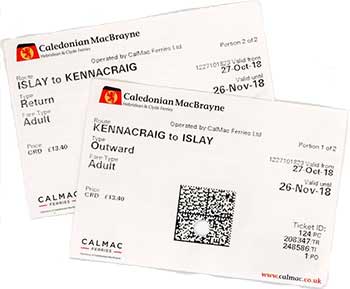 When you arrive at kennacraig for your ferry journey to Islay make sure to arrive on time. I always say at least 45 minutes in advance. You’ll report at the entrance of the parking area where you’ll have your tickets checked, assuming you’ve made a booking in advance. This is HIGHLY recommended as the Islay Ferry is often fully booked.

After you’ve shown your tickets you are directed to a lane where you’ll have to wait until you can board the ferry. Assuming the ferry is on time you can usually board around 10 to 15 minutes before sailing time when the arriving passengers and vehicles have onboarded the ferry. When you enter the ferry itself you are directed to a space to park. Always follow the staffs directions and make sure to apply the handbrake AND switch off your car alarm.

When you leave your car you’ll go up to the passenger areas where you can either go directly to the cafeteria for a meal or you’ll find another place for the journey. If the ferry is crowded and you want to have a meal make sure not to wait too long in order to find a free table. The number of tables/seats, especially on the Hebridean Isles, is somewhat limited.

During the summer schedule period there are around five ferry sailings arriving and leaving Islay each day. In the winter schedule it’s sometimes down to three, or even fewer crossings.

Due to the ageing Calmac fleet, some ferries are around 30 years old, breakdowns occurred more frequently in recent years with cancellations or delays as a result. This is happening more often in the winter season due to high winds and/or swell conditions combined with the fragile state of some older boats. Cancelled ferries can be a real nuisance, especially when you’re living on Islay and have appointments on the mainland. Also businesses are sometimes hit hard when they can’t get deliveries or supplies. For tourists it can be very annoying as well and it can happen that you’ll need to find accommodation on the mainland because your booked ferry has been cancelled and a next one can’t take you if it’s fully booked or doesn’t sail at all.

Check if the ferry sails

Calmac has a few good systems in place to keep you up-to-date on cancellations. For more info on that please visit the Service Status page on their website or visit our comprehensive page on How to Check if the Islay Ferry is Sailing.

Future of the Islay Ferry

News item from the Ileach, dated 25 Sep 21: Caledonian Maritime Assets Limited (CMAL) has confirmed that a bidding process has been started for two new ferries for Islay! According to CMAL, following extensive consultation with Transport Scotland, CalMac, and communities on Islay, the decision has been made to build two vessels, providing much needed new tonnage in the fleet and improve the resilience of the network.

The two 94.8m long vessels will replace the 36 year-old Hebridean Isles and the ten year-old Finlaggan, the latter being allocated to a different route. The new vessels will have greater vehicle capacity than both the MV Finlaggan and MV Hebridean Isles, along with significantly lower energy requirements. They will be designed with a clear focus on freight, including the capability to operate a possible overnight freight service.

News item from the Ileach, dated 26 March 2022: Caledonian Maritime Assets Ltd (CMAL) has awarded the contract to build two new ferries for the Islay route, to the Cemre Marin Endustri shipyard in Turkey, following a ten day standstill period since the announcement on Friday 11 March.

The new ships will replace MV Hebridean Isles and allow the redeployment of MV Finlaggan to another route, while bringing a 40% increase in vehicle and freight capacity on the Islay routes, along with a reduction in emissions and improve the resilience of the CalMac fleet. The first ferry is expected to be delivered by October 2024, with the second vessel following in early 2025.

I'm not sure if there are places in Europe where wildlife is more abundant and as diverse as on Islay. Wherever you walk or drive, there is always something to be seen, and often something special … END_OF_DOCUMENT_TOKEN_TO_BE_REPLACED

Islay Sea Adventures Trip review. For centuries people have used the seas as a … END_OF_DOCUMENT_TOKEN_TO_BE_REPLACED