A lovely report of a nostalgic trip to Islay more than hundred twenty years ago.

Rona MacKenzie in the Ileach Newspaper: I recently found a copy of the book ‘Sailing Orders’ by Captain Harvey among books belonging to my late husband, Donald MacKenzie. This book was published in 1935 by Alexander Maclehose & Co. When I read in the prologue that James had spent his summer holidays in Bruichladdich, I became very interested, and have tried to find out more about him. His father, William, was the eldest of three brothers who built Bruichladdich Distillery, which opened in 1881. They belonged to a Glasgow distilling family. He married Ellen Robertson in 1882 and they had a family of eight, and James was the second son, born in 1884. He joined the Royal Navy in 1899, becoming a naval surveyor in 1906. In World War 1, he was the navigator of the Battle Cruiser ‘Kent’ when she made her epic voyage from the battle of the Falklands, burning all of the woodwork on board after her coal ran out. A chart of this voyage, the longest ever made by a coal burning battleship, was hung in the Admiralty. James later became a chartmaker, and came ashore from the Navy in 1929. The family had a great interest in boats and always had a sailing boat on Loch Indaal. 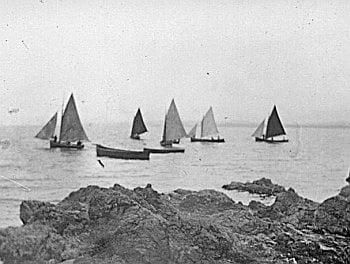 In the prologue to the book, James writes: ‘Up to the age of sixteen, I spent all my summer holidays from the beginning of June until well into September at Bruichladdich in the island of Islay, where I learnt much about sailing boats from the fishermen, and began early to sail one of my own. In Bruichladdich there is a small field between the road and the sea, which is used by the fishermen for laying up their skiffs and one or two luggers, and for drying and tanning their nets and sails. The men and boys of the village used to come there after work on summer nights and practise throwing the hammer, pole jumping, and hop-step-and-leap, and we boys used to compete with the help of a handicap. Most of the talk was in Gaelic and I can still talk it but not much now.

‘If there was a boat to be hauled up the men were always willing and ready to turn to and do it. The boats were generally pulled up on rollers, and I have seen about twenty men pull up a Loch Fyne lugger, weighing about three or four tons, quite easily, with their backs against her and holding on to the clinker planking with their fingers, all heaving together while gradually, up she came, foot by foot.’

James’s father William took part in an annual regatta on Loch Indaal. This is a description of one of his boats. ‘About 1896 my father had the ‘Ina’ built by a local boat builder, a man about fifty, who had been building boats all his life: and many a happy day I spent helping him by holding the planks of the ‘Ina’ when he was building her. I don’t think he had any drawings at all; he was just given the rough measurements, and he made a wonderful job of her. The completed boat, although she must have been about two and a half tons with her ballast, only cost about £20, and Willie Beaton did practically everything himself, even going up the hillside behind the farm and collecting the clay with which he made the mould for the lead keel, which keel was about twenty feet long, ran right fore and aft and was about five inches deep at the stern, and three inches at the bow, weighing, I think, about half a ton. She also carried about one ton of ballast inboard.

‘I cannot give more detailed information about the old ‘Ina’ because she came ashore on the rocks, breaking adrift from her moorings some time in 1920. A southerly gale was blowing at the time, and she was so badly smashed up that she was afterwards cut in two and became two excellent hen houses. Old boats usually finish as hen houses in Islay.’

Following is a description of an all day picnic to Laggan, a favourite place of the family for picnics and camping, which ended memorably. ‘We always had a great respect for Laggan and the following story will give a good reason for this. It was in 1889, when my father owned a ship’s lifeboat called the Whiteboat which we used for day sailing in the loch. She had belonged to a large ship which was wrecked on the west coast of the island and became a total loss. The Whiteboat was about thirty feet long by eight feet broad, with a straight keel, whaler stern and a straight bow. She was rigged as a cutter with a gaff mainsail and a large jib. The forecastle was decked as far as the mast and there was a small cuddy below. 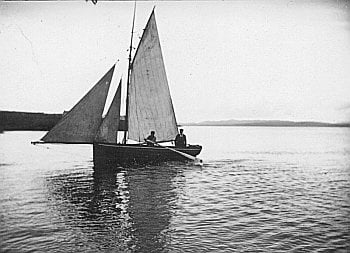 ‘A picnic to Laggan was arranged, the party consisting of my father and mother, Captain Hannah (captain of a local coasting schooner) big Donald and four children. I was one of the four and only five years old at the time, so this yarn is mostly from hearsay. We had been picnicking in the bay just round Laggan point. About five p.m. the wind began to get up from the north-east but being in the shelter of high cliffs we did not realise how hard it was blowing. When we got round the point and clear of the lee of the land the wind was blowing down the loch with nearly gale force. Laggan is only about four or five miles from the head of the loch, consequently the sea was not big, but it was steep and the tops were being blown off the waves by the force of the wind. Almost as soon as we cleared the land the jib blew to ribbons and the jaws of the gaff broke. A small cousin and myself were in the cuddy and I have a faint remembrance of big boots pounding over my head as big Donald was trying to anchor. The anchor was not heavy enough to carry the rope down to the bottom but it made an excellent sea anchor and held her head up to within about three points of the wind. Captain Hannah, Donald and my father managed to get the boom off the mainsail and rig the mainsail as a lugsail with the tack made fast to the stemhead. Then the cable had to be cut as they could not get the anchor, and we were away for Port Charlotte with the wind on the beam, the wind being now more easterly. The Whiteboat was taking a lot of water in, which meant bailing all the time, but making very good weather of it, this being about her best point of sailing.

‘As we approached Port Charlotte it was a lee shore. There is a small stone pier with a narrow steep beach of pebbles and sand to the north and big rocks to the south. Port Charlotte was a busy fishing port at the time and the shore was lined with people watching us. Captain Hannah was steering and brought the boat in, about 20 yards to the north of the pier, and between two lines of fishermen who had waded in nearly up to their armpits. As we came in they seized the boat and took us up above high water mark, with sails set, and ballast, crew and much water, in the boat. Of course the speed of the boat and the sails being set helped. My father always describes this as the finest piece of combined seacraft that he has ever seen. Each man knew exactly what was to be done and did it with never a sound from anyone. We were passed out of the boat and into the inn where with dry clothes and a big peat fire we were soon warmed up, and then, packed into an open wagonette, we drove home.

‘My mother is now eighty, but if you talk of Laggan in stormy weather I think she always sees the Whiteboat and two lines of men waiting at Port Charlotte.’

After reading these vivid stories of Islay life in the past, I wanted to pass them on to others who have a similar interest.

This story was published with kind permission of the Ileach local newspaper.

I'm not sure if there are places in Europe where wildlife is more abundant and as diverse as on Islay. Wherever you walk or drive, there is always something to be seen, and often something special … END_OF_DOCUMENT_TOKEN_TO_BE_REPLACED

Islay Sea Adventures Trip review. For centuries people have used the seas as a … END_OF_DOCUMENT_TOKEN_TO_BE_REPLACED