Port an Eas Beach is a somewhat “hidden” beach on the Oa Peninsula, somewhat similar to The Singing Sands Beach Hidden because it’s not anywhere near one of the main roads on Islay and also hidden because you can literally be in the area and completely miss it. Access to this beach is not very straight forward and requires a walk over farm tracks and the last bit over grassy terrain can be wet underfoot. Getting to Port an Eas is worth it though. Let me tell you how to get here:

Walk to Port an Eas Beach

It’s best to park next to the cemetery at Kilnaughton Bay. Walk towards Carraig Fhada lighthouse. Just before the track to the lighthouse starts turn right and head up the hill. The tarmac road becomes a track and after a few hundred metres up the hill you go left, not the first one, that’s the entrance to a new house, but the second one. Now keep on going for a mile or so passing a few gates. The track now goes left and down towards a big house. Remain on the track which get’s smaller and smaller. At this point you can see a few ruined buildings on your right next to the track. Here you should leave the track slightly to the left and cross the field towards the fence. There’s a gap in the fence where you’ll find a steep track going downhill to the beach. The views from this point are amazing and make sure to keep an eye out for the feral goats.

The beach at Port an Eas is a beautiful sandy east-facing beach, completely sheltered from westerly winds. Mornings and early afternoons are best to get the most from the sun. There is a burn on the south side of the beach which is an interesting feature in between the rocks, together with the waterfall. The views from the beach are wonderful too. On a clear day you can see the Kintyre Peninsula and Mull of Kintyre and the coast of Northern Ireland. Due to its remote location you’ll probably have it all to yourself, much like some of the other beaches on Islay. 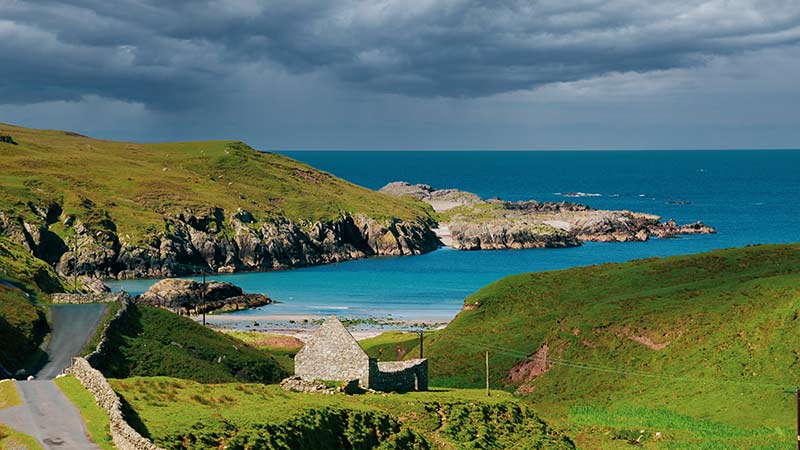 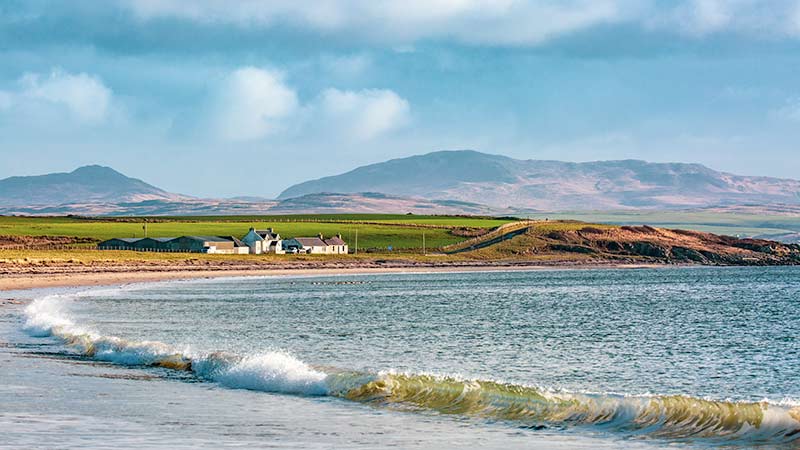 From a landscape point of view the Oa peninsula is quite different from other parts of the island and it appears that there’s not much ‘To Do’ out there, but don’t let the empty landscape fool you. The Oa has many highly interesting features such as Soldiers Rock, the RSPB nature reserve, the beach at Lower Killeyan and the American Monument which commemorates the sinking of the Tuscania and Otranto troopships during world war 1.

In earlier times hundreds of people lived on The Oa Peninsula but most of them are long gone, often gently cleared from their land. Most of these people left overseas leaving their homes, which become the visible remains of past family life in the current landscape. The only settlements that remain are at to be found along the main road heading towards the American Monument with names such as Cragabus, Coillabus and Risabus. These place names ending with “bus” are of a Norse background, where bus means farm.

I'm not sure if there are places in Europe where wildlife is more abundant and as diverse as on Islay. Wherever you walk or drive, there is always something to be seen, and often something special … END_OF_DOCUMENT_TOKEN_TO_BE_REPLACED

Islay Sea Adventures Trip review. For centuries people have used the seas as a … END_OF_DOCUMENT_TOKEN_TO_BE_REPLACED