Kingdom of MacBrayne, a Book Review: Caledonian MacBrayne, or Calmac, is the ferry operator for the majority of islands off the Scottish west coast. Calmac is a familiar name for people who make use of their reliable ferry service. I still remember my first trip very well, it was during my honeymoon in 2004 when we sailed to Port Ellen on Islay from Kennacraig. The weather was beautiful, sky and sea were blue and we had a marvellous trip on the MV Isle of Arran. It was on that trip that I spotted my first Minky Whale halfway between the mainland and Islay. For many people the name Calmac is synonym to Scotland, islands, Hebrides and holiday!

Caledonian MacBrayne started life on the 10 February 1851 as a steamer company. The company at this time was called David Hutcheson & Co and had three partners – David Hutcheson, Alexander Hutcheson and David MacBrayne. The fleet, which David Hutcheson & Co inherited, comprised eight paddle steamers and two track boats on the Crinan Canal Ardrishaig on the Clyde and the West Coast. Throughout the late 1870’s and 80’s the MacBrayne empire continued to expand with a mail to Islay, Harris and North Uist from Skye. In the final months of the decade MacBrayne took over the Outer Isles run from Oban to Barra and South Uist. The foundation was made for a very succesful company, which is now fully owned by the Scottish government. 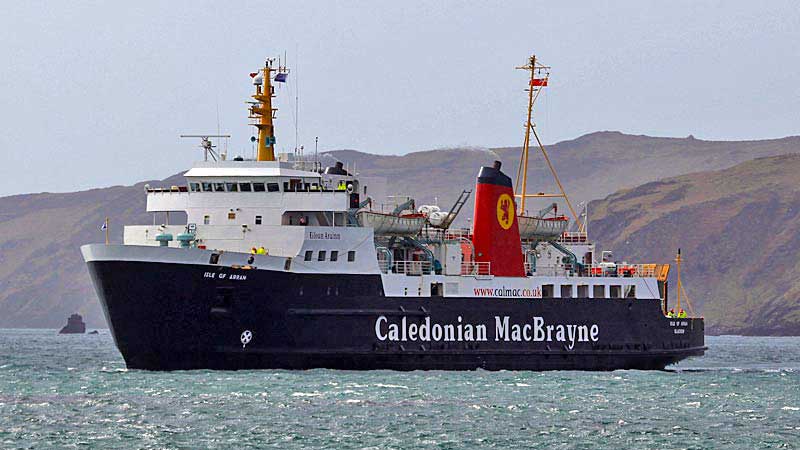 A few years back a book was published about the history of MacBrayne called “The Kingdom of MacBrayne”. It tells the story of David MacBrayne, his ships and his company. The book explores the world of the early steamships, their successes and failures. Emigrants, tourists, ordinary travellers and crew members, from engineers to pursers, speak of the ships and their impact on their world. The book documents the arrival of motor-ships (in which David MacBrayne was a world leader) in the early 1900s. The book was written by by Donald E. Meek and Nicholas S. Robins. David Ross from the Herald wrote a very nice book review called Tales we can all believe in:

Calmac’s story is a human tale, compelling to anyone who was brought up on tales of the intuitive genius and courage of MacBrayne’s skippers and their crews, with their nicknames: Squeaky Robertson, Hurricane Dan, Paraffin Dan and Polaris, the last so-called because he was reputed to be the only master to break radio silence at the time of the Cuban missile crisis. These men represented a link to something very important in our past. There was a time when the seaways off the west coast were unimaginably busy. Before the First World War there were 32 vessels in MacBrayne’s fleet, and they were just one operator.

The Book The Kingdom of MacBrayne can be purchased on Amazon and the local bookshop in Bowmore.

I'm not sure if there are places in Europe where wildlife is more abundant and as diverse as on Islay. Wherever you walk or drive, there is always something to be seen, and often something special … END_OF_DOCUMENT_TOKEN_TO_BE_REPLACED

Islay Sea Adventures Trip review. For centuries people have used the seas as a … END_OF_DOCUMENT_TOKEN_TO_BE_REPLACED